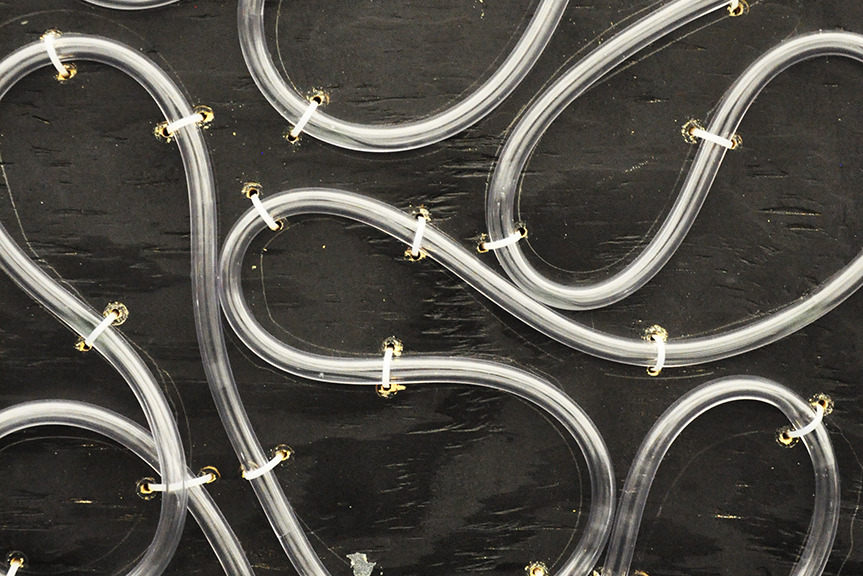 We purpose to build an Algae Carbon Dioxide Scrubber for our final project. Algae carbon dioxide scrubber is a device absorbing and filtering carbon dioxide (CO2). Some of the usage existing are from industrial plants (filter pollution exhausted) or spacecrafts for astronauts (life support system). We strive to re-purpose this method to be accessible and sustainable within a home setting. By using greener material to filter air, we could possible reduce a higher degree of carbon footprint. Could this device be designed as part of the blueprints of our homes?

Breathing is fundamental for humans. animals and plants to stay alive. Do you know what exactly we are breathing into our bodies? The air in the city is different then rural locations. The inventions of the city: cars, electricity, air condition, and heat create bad gases which pollutes air.  Air pollution are poisonous and may be dangerous for the human body. What we described above are happening outdoors with the most populated and developed cities. However, air pollution may also occur within the warmth of our homes called indoor air pollution. The level of pollution indoor may be lower then outdoor. Fresh paint, burning of fuel such as coal, gas, in heaters, stoves and ovens may cause indoor air pollution. The home must be ventilated by opening the windows or use a fan to reduce indoor air pollution.

By using algae as biofuel, we may create world’s supply of oil, while decreasing amount of atmospheric carbon dioxide. Algae may also be used as food or fertilizer. This project is not only sustainable, but also adaptable to fit inside of the home environment.

Where is it used?

Using algae to reduce CO2 is a known algae-based “Carbon Capture Technology”. Carbon Capture Storage (CCS) is a process to capture CO2 from a large source, transporting it to a storage site, and depositing usually underground where it would not enter the atmosphere. Factories and power plants may also maintain their own ACDS to filter industrial pollutants and gases. Algae may use these power plant exhausts to generate green-oil and fuel. 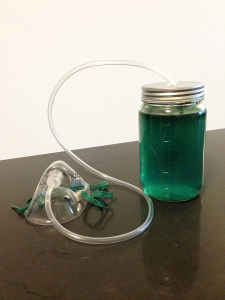 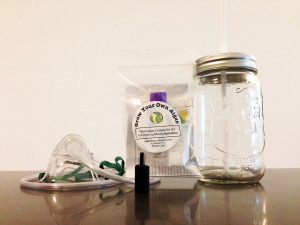 The first prototype is a portable breathing device created with a glass bottle, tube, and an oxygen mask. A hole is made on the top to feed through the tube connecting to the algae and oxygen mask. 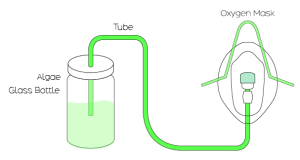 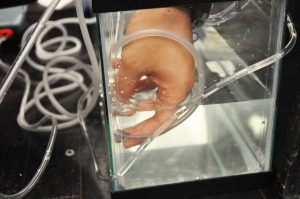 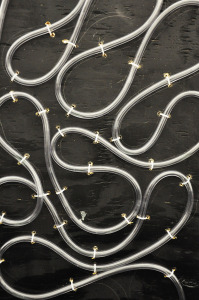 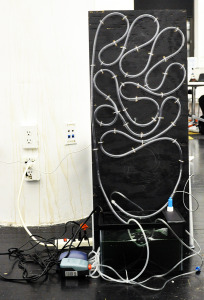 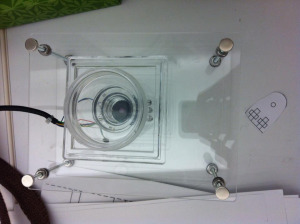 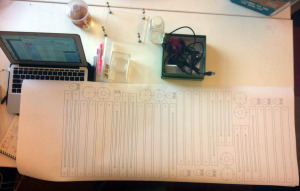 I then moved on to build a microscope stand for my Aquafarm. I imagine the microscope position could be easily moved in a x-y plotter format. The first paper prototype printed was crucial to determine suitable measurements for each acrylic piece. 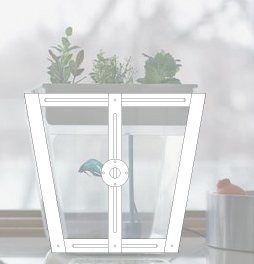 The next step for this project is to create a x-y plotter microscope that can be controlled by Arduino, where users are able to moved/rotated the microscope around the aquarium with a pair of Stepper Motor and Gear & Belt. I imagine this aquarium can be live-streamed and visitors to the website may control the physical controllers to view through the microscope on the browser.

I plan to house Sakura Shrimps, Mosses, and Snails in this Aquafarm.

C.P. Snow, English physicist and novelist coined “the two cultures” in 1959 (Snow, 1). Snow’s concern is not so much of no shared intellectual culture (between scientific and literally scholars), but rather it puts danger to world’s problem.The three scope Snow identified are the invention of nuclear weapons (scientific advancement), over-population (scientific pairs with medical advancement), and finally widen the gap between rich and poor (advance of industrialization). It is evident that scientific and technology innovation have driven advancement in civilization. Science have provided more exciting ways for us to understand the natural world. Snow predicts it is possible to be educated in both science and humanities.

Industrialization widens the gap between relationships customer and the producer. The gap includes artificial perception and connection between people. For example, in the first world country, we get food from supermarket. Our understand to where the food source is from is usually unnoticeable. We invest so much scientific method into efficiency that maybe what matters the most for the benefit of the world is not important on the agenda.

A project I saw recently: Project Just, founded by Shahd AlShehail, Natalie Grillon, and Shruti Goins, it is a application/service to aim for transparency between designer and consumer. There are QR codes attached enables users to scan and to obtain information regarding the origin and manufacture history of the product. 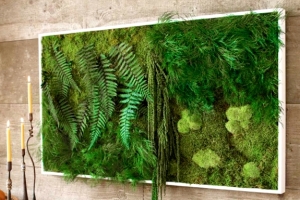 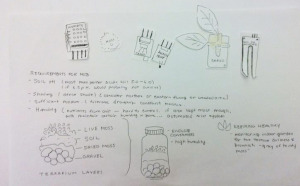 What is the perfect environment to grow Moss in an open indoor setting?

Hello my name is Norma and I am a 2nd year D+T student. I am from Toronto and I have a background in Art & Art History and Visual Communication. My work is in the field of web design and eCommerce (via WordPress & Magento). I am interested in web interaction. I would also love to improve my skills in code.

I visited NYU ITP show in 2013 and I was drawn to Lisa Park‘s “Eunoia” which is translated to “beautiful thinking”. This installation includes 5 circular metal disk on top of a speaker. It is a real-time art piece that collects brain waves from EEG sensor, translating them into vibrations to form patterns from water. “Cloud” is an installation project featured on Nuit Blanche Calgary in Alberta, Canada. The installation contains 5,000 donated light blubs. Each light blub have its own chain to pull the switch on and off. There is no telling how the circuit is wired or which part of the cloud would flicker, turn on, turn off, or burn out. The installation may engage participants or total strangers to interact with another. Each person’s actions have an influence on another. 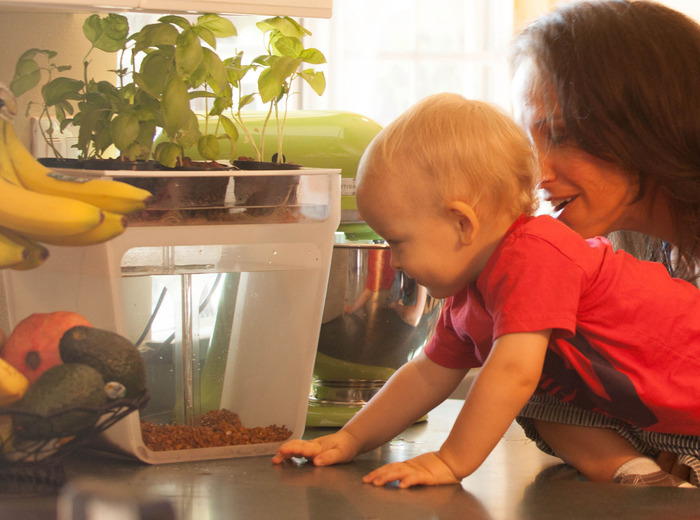 “Back to the Roots” is a planting kit that is an “closed ecosystem” that allow the user to grow fresh plants while using the waste from the pet fish as fertilizer. “Biome” is a concept by Samuel Wilkinson that is a more complex plant ecosystem that can monitor plant data (such as water, humidity and nutrients) but not automatic. Wilkinson notes on ‘digital downtime’ to find an alternative use that is related to the physical world for smartphone users.